ArchiMate 3, at first glance, looks like a very orthodox IT-oriented enterprise architecture modeling langage. It can show how the business is supported (‘service-oriented’) by applications which are supported (‘service-oriented’) by infrastructure. This has been the Core of ArchiMate’s view on the enterprise since the beginning. Physical processes and materials have been added to ‘infrastructure’ (which has been renamed to ‘technology’) but even with that we still are in effect talking about a classic BAT-stack (Business–Application—Technology).

From ArchiMate 3 on, however, this strict layering has been loosened in an important way. This is an important improvement, because it was always a rather difficult puzzle to model complex stacks, because of the strict one-way layering. I’ve illustrated this in the following diagram (in the Mastering ArchiMate colour scheme): 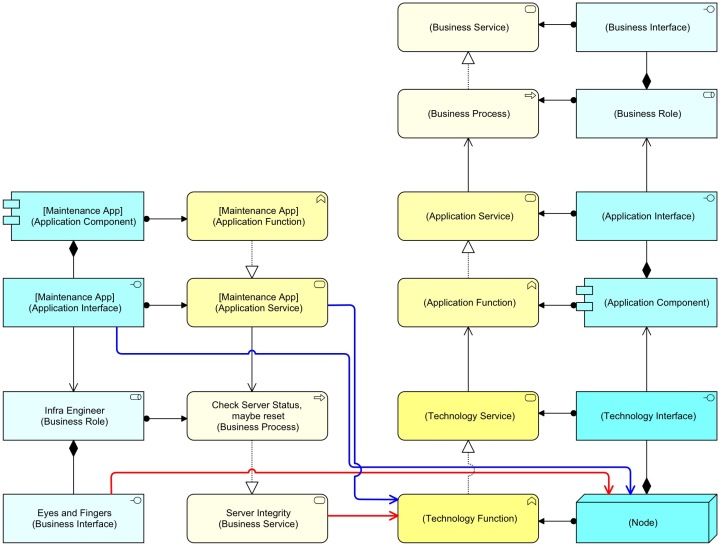 On the right hand side, we see our classic BAT-stack of the ArchiMate 3 Core. There is a Business Process performed by a Business Role, the process and the role are supported by an Application Service and Application Interface which are the visible parts of the application. The application itself is supported by a Technology Service and Interface (runtime environment, file shares, database, etc.). Everything that is part of the normal classic stack. But in this diagram, something has been added on the left hand side.

Two things have been added.

Have a look at this depiction:

In this diagram, you see the blue route from the previous diagram, and it illustrates that the stack in ArchiMate 3 is not only BAT, but also TAB. And it nicely shows how, via applications and technology) the primary business process depends on the infrastructure maintenance process, a dependency that even survives ArchiMate’s derivation mechanism.

There is a disadvantage to this way of modelling, though. Can you spot it? The first post ever on this blog (from May 2011, which actually addressed the issue of operations supporting IT infrastructure) holds a clue.

My Tweets
Follow R&A IT Strategy & Architecture on WordPress.com